Photo by: ILRG for USAID

The efforts are not only changing gender perceptions but putting rural women on a new career path: Community Scout is the first step towards increasing the number of women taking up employment in the male dominated wildlife sector.

Every day, Zambia’s Game Management Areas are patrolled by joint teams of Department of National Parks and Wildlife (DNPW) Wildlife Officers and Community Scouts sourced from local communities. These Community Scout jobs are disproportionately held by men due in part to gender stereotypes that only men are capable of performing the duties of protecting wildlife and forest law enforcement.

To change this perception, USAID Zambia is working with conservation NGOs, the DNPW, community resource management groups, and the private sector to change the gender balance, and create a pipeline of female Community Scouts who can demonstrate the leadership role that rural women can play in effective natural resource management.

With USAID support, the DNPW is examining and adapting its training program and practices to increase the opportunities for women to become Community Scouts, while maintaining course rigor. USAID worked with DNPW trainers to analyze physical fitness requirements, as well as challenge stereotypes that can disadvantage women on the job; for example, assumptions that female scouts will take on an increased proportion of cleaning and cooking work during operations. Scouts and DNPW trainers are also encouraged to reflect on the risks that women face, such as retribution from their families or communities for leaving their home responsibilities while on two-week patrols. 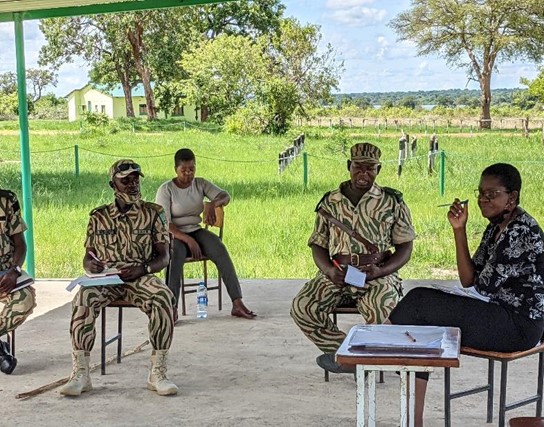 Zambia’s conservation community is getting behind the initiative. In the past two training courses, the number of female Community Scouts sponsored by Zambia’s conservation NGOs and private sector game ranches has increased dramatically. In the latest group of 46 scouts, 50% were female, which is a first for the DNPW.  “Wildlife protection is often perceived to be a man’s role. At Conservation Lower Zambezi (CLZ), we believe in equality and recognize the value women bring in protecting our natural resources. For this reason CLZ is currently investing in the training of Zambia’s first all-female Community Scout Unit,” says Ian Stevenson from CLZ. Hassan Sachedina from BioCarbon Partners notes: “We see women leading, pioneering, and catalyzing at all levels in the critical fight for biodiversity protection and wildlife habitat conservation in Zambia. Across 13 Chiefdoms, BCP has supported the training of 29 female Community Scouts out of 105 Community Scouts that BCP funds. We are really proud to be striving for and creating strong female role models for future generations.”

These efforts are not only changing gender perceptions but putting rural women on a new career path: becoming a Community Scout is the first step towards increasing the number of women taking up employment in the male-dominated wildlife sector. Community Scouts who excel in the job have higher chances of becoming a government Wildlife Police Officer.

“We are of the opinion that we need to reorient mindsets towards the concept that being a Community Scout is a career in itself for motivated young men and women, with opportunity for development, no matter what their education level,” explains Moses Nyoni from the Nature Conservancy.

USAID will continue following the progress of the Community Scout selection and training process over the coming years to support gender integration at the DNPW and ensure the young women community scouts advance in their careers.

A Community Scout Spreads her Wings

“At first I thought I couldn’t do it, but I have done it! I am excited with great expectations! And I am soaring higher and higher!”

After dropping out of college due to financial difficulties, 23-yearold Lisa Siamusantu had no job and started selling vegetables at the community market with hopes of raising enough money to go back to college one day. One day, she saw an advertisement in the community newspaper for Community Scout training and she applied.

“All my friends discouraged me and said that I was not strong enough, but the advert said they wanted women too,” Lisa says.

She joined a scout training camp sponsored by Conservation Lower Zambezi in December 2020 in the Lower Zambezi National Park and is expected to graduate in March, three months later. Coming from a community where people believe Community Scout jobs are only for men, Lisa began to see herself as a trailblazer. She is excited about the opportunity to be part of the conservation team, and the experience has readjusted her views of traditional gender roles.

“The way I viewed the Community Scout career and the way I viewed myself have changed. I used to see it as a career for men, only those who are very strong, but being here makes me realize that anyone can do it. This changes everything, my mindset and attitude,” she explains. And for those friends who discouraged her and for Zambia’s young women, she has a message.

“Do not accept or embrace beliefs that downgrade you as women and discourage you from trying. The reality is a woman can do anything a man can. If I have done it, so you can.”

All Photos: ILRG for USAID