The pandemic has shown the Colombian government how structural land issues continue to hamper rural development.

Colombia’s hospitals have been challenged due to Covid-19, and while the government rushes to strengthen the country’s healthcare system, intensive care unit occupancy remains high throughout the pandemic.

The crisis has led many leaders to recognize that behind the draconian measures to curb infection, there are fundamental problems that undermine Colombia’s public service delivery and prosperity, such as issues with land administration and property formalization.

In the midst of a health crisis, the nation’s rural health centers are becoming more and more crucial as the virus reaches isolated areas. Thousands of families are a one or two-day trip from a hospital, so rural health clinics play a vital role in providing intermediate care as well as ambulance services to regional centers with specialized professionals. But many of these rural clinics, which belong to municipal governments, have never been formalized or indexed in Colombia’s national property registry.

In Tumaco, where Covid-19 made headlines early on in the pandemic, there are 80 rural health clinics. But 80% of Tumaco’s parcels are informal and unregistered, so Tumaco’s mayor, María Emilsen Angulo, who has been working hard to mobilize support for Tumaco’s hospitals, can do little for health clinics in rural areas that do not even have a registered land title. This year, USAID and the Colombian government have scheduled to begin massive formalization efforts in Tumaco.

The USAID-funded Land for Prosperity Activity is assisting Tumaco’s mayor to make land issues a priority over the next four years. With USAID support, the municipality’s Territorial Development Plan has earmarked funds to push land formalization to the forefront of public policy. Tumaco is also strengthening its Municipal Land Office, where a team of legal experts specialized in land have begun looking at which parcels can be formalized in the name of the municipality without having to hire expensive professional services.

“USAID has the funds that we don’t have. Plus, they already has the experience of rolling out a massive formalization and cadaster update pilot in Ovejas, Sucre, so here in Tumaco, we won’t have to improvise. USAID already knows the best way to do it, Angulo says.

The lack of information about which parcels are formalized is just the tip of the iceberg. The majority of Colombia’s rural municipalities have never analyzed the situation to discover what properties—schools, clinics, parks, and utilities—are informal or why.

“As we embark upon improving our health clinics, the formalization of municipal property is a requirement for any investment.” María Emilsen Angulo, Mayor of Tumaco

A Strategy for the Nation

Over the next three years, USAID and the Colombian government are employing similar strategies in Cáceres, Antioquia; Sardinata, Norte de Santander; and Ataco, Tolima, among dozens more. By building on the previous five years of the USAID-funded Land and Rural Development Program, which strengthened Colombia’s land-related agencies and institutions, USAID believes Colombia’s government has the tools and determination to expand land formalization efforts to strategic regions, while updating the national cadaster. Colombia’s leaders are hopeful. Just last year, Colombian President Duque announced his plan to update at least 60% of the nation’s cadaster by 2022.

USAID’s goal is to create and support Municipal Land Offices in 12 municipalities in seven target regions, where more than 90 rural clinics could be prioritized for formalization and titling. 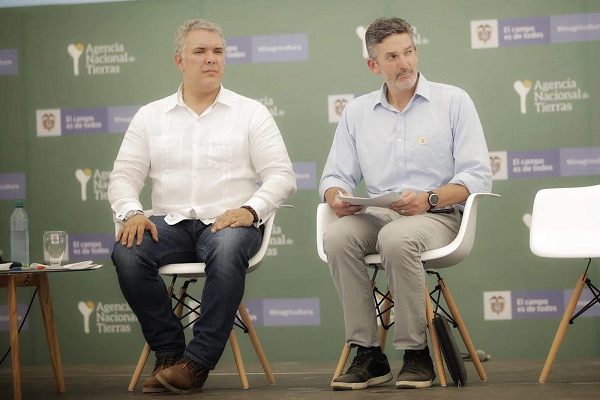 “The Municipal Land Offices are fundamental for the implementation of land policies, since they allow the municipality to attend to the formalization of urban properties with a gender focus and support social investment in basic services such as education and health.”Lawrence Sacks, USAID Colombia Mission Director.