ILRG is carrying out a range of additional activities that are either fairly small or under development. 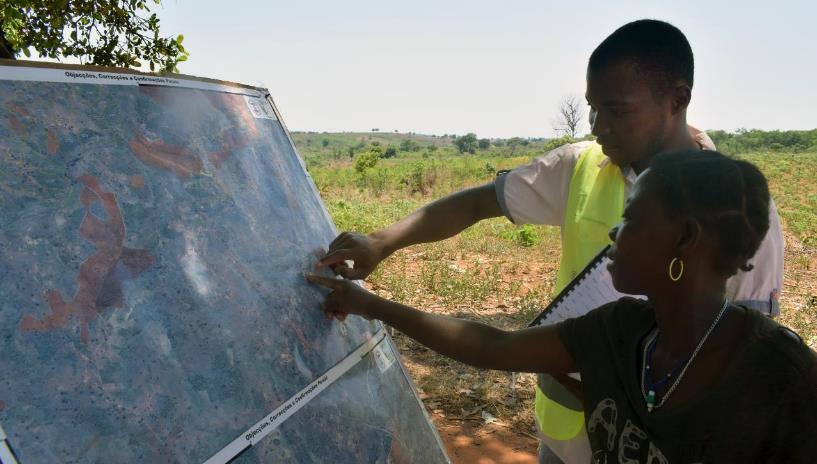 During the first quarter of fiscal year (FY) 2020, ILRG clarified obligations through July 2021, which allowed for broad planning of the majority of funds across ILRG countries. This exercise has been particularly important as ILRG works between the term and completion portions of the contract within a total budget ceiling for the contract’s base period.

W-GDP: ILRG obligations for W-GDP were confirmed in October, which led to the rapid development of a work plan across five countries. Activities were defined for Mozambique, Zambia, and India, while ILRG launched a dialogue on W-GDP in Ghana with private sector partners Hershey and Ecom Agroindustrial Corp. (ECOM) and performed an assessment of gender integration in implementation of Malawi’s 2016 Land Act. Completing work plans and launching activities in each of these countries is a major priority for the coming quarter.

Mozambique: ILRG completed field implementation grants on community land regularization and land readjustment with the Associação Rural de Ajuda Mutua (ORAM) in five communities in the province of Zambézia, and the Hluvukani Cooperative’s work in areas near Illovo’s sugar factory outside of Manhiça in Maputo Province. ILRG documented land conflicts in the Illovo area and shared the results with the relevant district and municipal authorities responsible for resolution/mediation. Within the area supported by ORAM, district authorities took on the responsibility for leading the land readjustment process using the maps and data produced with ILRG support. These products will continue to be used as the community considers internal readjustment, as Portucel has provided a consultant leading the design of the irrigation approach.

Mozambique challenges: Elections in October 2019 slowed fieldwork and opportunities to carry out field assessments for a short-while. This quarter was used to negotiate plans for FY 2020 and FY 2021 with respect to W-GDP, as well as emergency/disaster relief programming. Building trust with senior management of private sector partners and understanding their relative commitments and constraints slowed progress, but also created a strong basis for moving forward over the next eighteen months.

Zambia: Policy engagements continued with the National Land Policy, as ILRG supported the Ministry of Lands and Natural Resources (MLNR) to engage with stakeholders for an early 2020 pre-validation and (hopefully) subsequent validation meeting. The House of Chiefs worked closely with ILRG in the development of a traditional leadership and governance course, expected to be rolled out in 2020, through participation in the African Land Policy Conference, and in strategizing on W-GDP support for a House of Chiefs Policy on Gender and Women’s Empowerment. ILRG worked with the Zambia National Community Resource Board Association (ZNCRBA) to carry out the National Community-Based Natural Resource Management (CBNRM) Conference with almost three hundred participants from across government, community-based organizations, conservation organizations, and traditional leaders, as communities seek access to benefits legislated under wildlife legislation. With respect to field implementation, both the Chipata and Petauke District Land Alliances have established strong relationships with district planners on integrated development planning for new districts, including piloting a complete village census across five chiefdoms in Petauke District. Basemaps have been prepared and finalized for the parcel demarcation and claims process, which are expected to be largely completed over the next quarter for two large chiefdoms. Natural resource management partners continued with community governance activities and processes for registration of forest areas. Partners are working on mapping boundaries and examining opportunities for community wildlife economy activities.

Zambia challenges: ILRG has yet to gain policy traction with the Department of National Parks and Wildlife (DNPW), and with the addition of W-GDP funds risks stretching itself too thin across land, natural resource management, agriculture, gender, and district planning. ILRG is at a stage of identifying whether its partners are likely to be self-sustaining post-grant activities. Nevertheless, there is substantial progress and doors are opening to engage with customary leaders on governance and with the MLNR.

Ghana: ILRG continued deepening experiences in Asankrangwa, alleviating concerns and rumors from some community leaders, and embarking on a land use planning process, through the ECO Game, informed by a land use planning diagnostic. ILRG’s partner Meridia carried out community boundary mapping and parcel mapping in three villages during the quarter, testing a range of mapping models. The cost recovery model for selling FarmSeal documents to farmers performed much weaker than hoped. ILRG’s partner ECOM continued with its farm rehabilitation services across almost 100 acres of cocoa farms and food crops, with an unfortunate loss of significant maize crop due to army worms. ILRG has engaged effectively on the policy dialogue around tree tenure policy reform, integrating itself into the Legal Working Group on tree tenure. Toward the end of the quarter, ILRG’s participation in W-GDP became a focus of rapid planning, and ILRG launched a dialogue with Hershey and ECOM to program funds associated with W-GDP without compromising the original objectives of the partnership.

Ghana challenges: The program continues to grow organically, testing a range of hypotheses, but lacks a full-time team in country. Given the diversity of activities, a full-time team may not be advised, as a broad range of skills are required. As noted above, interesting results continue to emerge that highlight the challenges of making a cost-recovery model for land documentation work, as well as private sector supported cocoa farm rehabilitation.

India: ILRG India is providing support to members of 49 selected women’s groups across 12 pilot communities, including PepsiCo potato farming families. Within these 49 groups, two women’s land leasing groups are cultivating PepsiCo potatoes as part of an innovative pilot to facilitate access to land for women in West Bengal. The project developed participatory, gender-sensitive training modules for a package of PepsiCo-recommended technical practices for potato cultivation. The entire training program is being delivered in six phases. As of the end of the quarter, two modules had been designed, translated into Bengali, and delivered in all 12 pilot communities. In this quarter, ILRG provided another round of the gender sensitization/women in agriculture training to PepsiCo field agronomists, this time with female agronomists in Maharashtra, at PepsiCo’s request. ILRG also began preparations for a training module and toolkit on gender-based violence, which is being prepared in both English and Bengali.

India challenges: Common challenges of low literacy and education level, as well as limited time to attend trainings, affect the full participation of women in the program. Similarly, fewer than expected PepsiCo farmers are within the women’s groups. ILRG is adapting the program by ensuring that additional outreach is done specifically for PepsiCo farmers’ wives.

Additional activities: ILRG is carrying out a range of additional activities that are either fairly small or under development. The team is piloting and adapting a capacity assessment framework, and it is supporting global learning around Mobile Approaches to Secure Tenure (MAST). It is also engaging with USAID on sector guidance for USAID’s Indigenous Peoples’ Policy, and it is supporting a grant to New America to finalize E3/LU’s learning agenda. ILRG is also in the process of awarding two grants to carry out community land protection activities in Liberia. The team is developing a relatively small completion activity to support a property rights indicator sub-national deep dive. During this quarter, ILRG also finalized a land tenure assessment for USAID/Indonesia, and it began considering a potential completion activity in Madagascar.