The Land for Prosperity activity supports the Government of Colombia in improving rural households’ conditions to achieve licit economic development through land tenure strengthening, based on massive access to land titles, development of local government capacity for land administration, and citizens’ integration to licit socioeconomic opportunities. 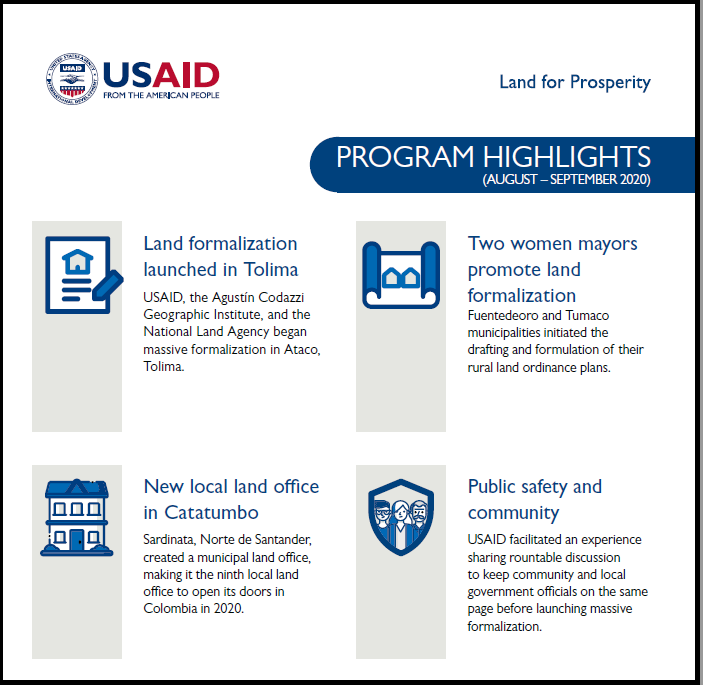 USAID, IGAC, and the National Land Agency (ANT) launched their massive formalization exercise in Ataco, Tolima. The cadastral survey will update the municipality’s 12,000+ parcels and formalize over 6,000 parcels. The innovative methodology is based on the Ovejas Pilot supported by USAID in 2019 and includes a social component that relies on the community to resolve the type of land conflicts typically found among large families and neighbors. Before implementation, USAID, the ANT, and local leaders in Tolima and Ataco updated the municipality’s rural land ordinance plans to prepare for the massive formalization exercise. By mid-2021, USAID and government agencies will have begun similar exercises in five Colombian municipalities.

Fuentedeoro and Tumaco municipalities initiated their municipal rural land ordinance plans. With USAID’s support, both municipalities have begun the first phase of drafting local land ordinance plans as part of municipality focalization carried out by the ANT. Land use planning is a critical tool in order to understand the needs of land administration, informality, and the types of conflicts preventing citizens and local government from formalizing and registering rural and urban properties. Both municipalities are led by women mayors who have strengthened USAID partnership by supporting Municipal Land Offices (MLO) and increasing land governance capacity of their administrations. Fuentedeoro’s MLO has worked with the national government to carry out the formalization, titling, and registration of more than 500 urban parcels since 2017. The municipalities expect to begin a massive formalization and cadaster survey exercise in mid-2021. Tumaco expects to update cadaster information for more than 15,000 parcels; Fuentedeoro, more than 5,700 parcels.

Sardinata launched its Municipal Land Office, making it the ninth of its kind to open its doors in Colombia in 2020. More than half of Sardinata’s 10,000 parcels are informally owned, and the
municipality continues to face challenges with removing mines and reducing illicit crops. The MLO concept, which was designed and modified by USAID with input from the ANT and IGAC over the last five years, allows local leaders to formalize and title public lands in urban areas in the name of the municipality, and acts as a link between residents and the national government in land and property matters. Each office includes an average of five employees specialized in law, land surveying, and social work. MLO are also useful to providing the national government agencies a local perspective on access and conditions while setting up the massive formalization exercises.

USAID gathered communities and local leaders in Bajo Cauca to dialogue about how to best lead land formalization acitvities in complicated regions of Colombia. The Roundtable Discussion on Experiences and Dialogue for Rural Land Ordinance in the Context of Building Peace, in Briceño, Antioquia included 37 participants, among those, social and community leaders, public officials, academics, and private sector actors from the Bajo Cauca and Catatumbo regions. The group talked with USAID-funded Land for Prosperity and Colombian thinktank Foundation for Ideas for Peace (FIP) about the challenges in security, public safety, and the presence of illicit crops in regards to land formalization. Among the recomendations made in order to overcome these issues and create confidence and buy-in, participants highlighted the need to maintain a vibrant connection with the community throughout the land formalization process. In the meeting, Horacio Rendón, a community leader from Cáceres, said “it is difficult to work in a territory plagued with criminal elements, that’s why every partner here needs to work together in order for massive land formalization to be successful. It’s not the type of work that one person can do.”