In most countries, women do not enjoy the same opportunities around access to, control over, and benefits from artisanal mining in their communities.

Artisanal and small-scale mining (ASM) is a significant source of income for tens of millions of people in developing countries. ASM refers to small groups and individuals engaged in low-cost and laborintensive excavation of minerals using minimal mechanization. ASM techniques are used in the production of precious minerals such as gold and diamonds, fertilizers used in agriculture, garnet used to filter water, and gravel and stone used for building bridges and paving rural roads. According to current estimates, at least 40 million people globally work directly in the ASM sector, and about 300 million people in more than 70 countries depend indirectly on the sector (Stocklin-Weinberg et al., 2019). Women are estimated to represent 30–50% of the global ASM workforce but are often overlooked by donors and governments. In Ghana, women account for as much as 90% of the gold mining labor force, and women represent the majority of gemstone miners in Tanzania (Yakovleva, 2007; Craig & Antonocci, 2014). 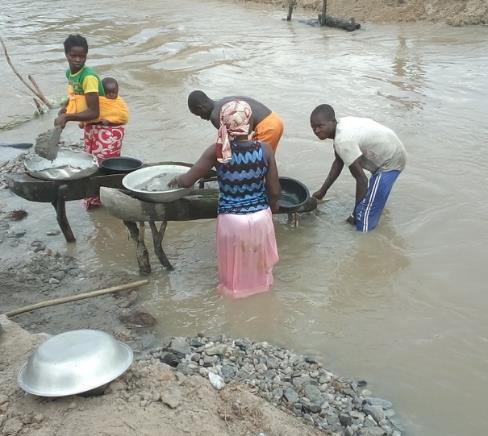 While there is significant variation across countries, women tend to earn only one quarter of what men earn in the ASM sector (Eshun, 2016; Lahiri-Dutt, 2018). Despite earning less than their male counterparts, ASM still represents a critical source of income for women. In some countries, the relative economic opportunities in the ASM sector are comparatively more valuable for women than men. For example, while women in ASM in Uganda earn less than men, women can still earn 335% more at the mine site compared to non-mining activities, while men can only earn 65% more (Buss et al., 2019).

In most countries, women do not enjoy the same opportunities around access to, control over, and benefits from artisanal mining in their communities. The division of labor within the ASM supply chain is typically gendered with women more often occupying non-digging jobs, such washing and crushing stone, and creating ancillary businesses, such as selling food and goods around mining sites (Arcos et al., 2018; Buss et al., 2017). However, women are increasingly stepping out of indirect supportive roles and engaging directly in mining (IGF, 2018).

Development interventions focused on the legalization of the ASM sector that do not explicitly promote women’s economic empowerment can have the unintended consequence of further excluding women from the economic benefits of ASM (Buss et al., forthcoming). At a national level, even when existing laws treat women and men equally, these laws are often still enforced and interpreted using existing societal norms—a reality that can often exacerbate inequalities between men and women.

Understanding how and why women and men differentially interact with, and are impacted by, ASM production and commercialization is key to bringing about reforms in this important economic sector. Gender differences can be found at all levels of the commodity chain, from the point of production to processing in the international economy. By exploring the gendered dynamics in ASM contexts, one gains a deeper understanding of how women in the ASM sector contribute to poverty alleviation, national revenue generation, and foreign exchange earnings. Social relations between women and men are structured through traditional gender norms and power relations. Much can be learned from applied research on the sector and the small suite of projects working in this sphere.

Shifting Views on Gender in the ASM Sector

The literature on gender relations in the ASM sector has evolved greatly over the past three decades. Over this period, the focus of research has shifted from an emphasis on the negative impacts of artisanal mining on women and children, the natural resource base, and labor violations to the important economic roles of women in the sector. 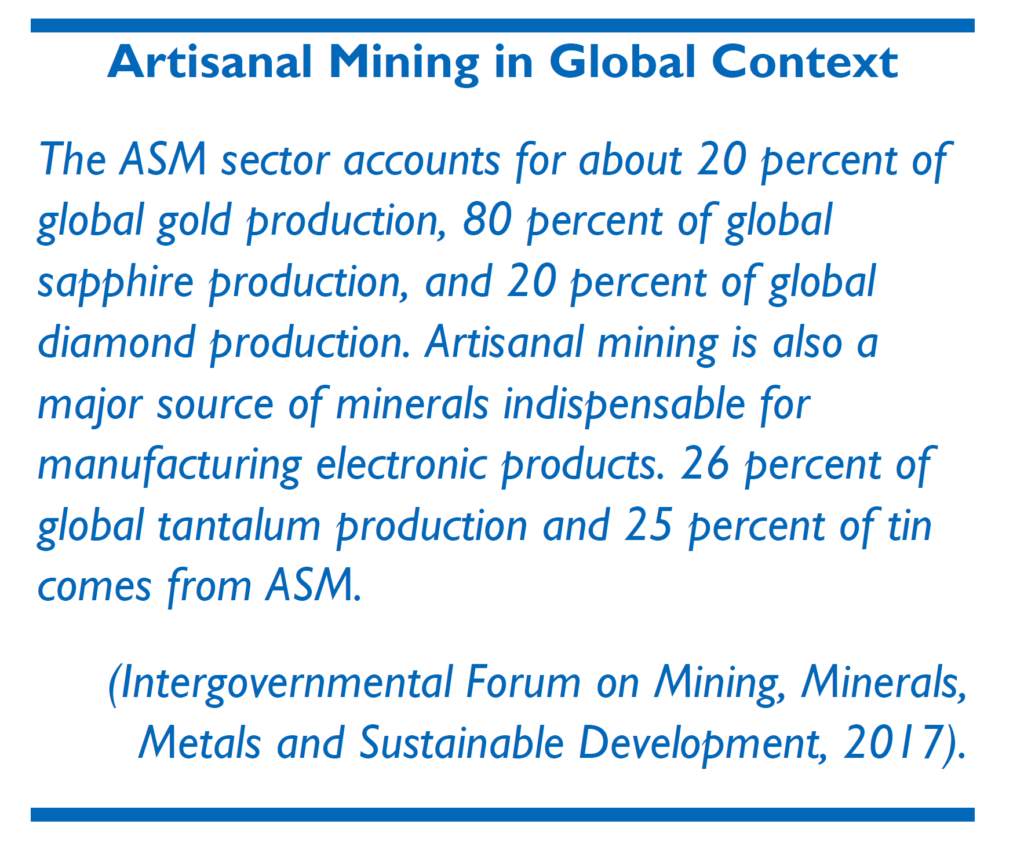 Prior to the 1990s, the ASM sector was largely viewed as illegitimate and a threat to the more efficient and profitable industrial mining sector. The sparse research on ASM tended to focus on extraction, placing an emphasis on the role of the miner in the economy. Women were described in terms of the roles they played in non-digging activities such as rock crushing, sluicing, washing, panning, sieving, transporting, and food vending. Early literature depicted women as a cheap and readily available reservoir of labor, but one that needed special protections (Lahiri-Dutt, 2012). To protect

women and children, some countries prohibit pregnant women from accessing mine sites to reduce their risk of exposure to mercury, a powerful neurotoxin. Other countries restrict the roles available to women in the sector, ostensibly to protect women from the risks of heavy labor.

In the early 2000s, the discourse on the ASM sector began to shift, and with it, the discourse on gender also began to shift. The international development community began highlighting the ASM sector’s potential to drive economic growth, alleviate poverty, and contribute to development. In terms of gender, a new focus was placed on the income-generating opportunities for women involved in the various stages of mineral extraction. However, the literature continued to portray roles typically filled by women (e.g., rock crushing, washing) as ancillary, despite their importance to ASM supply chains.

Increasingly, gender considerations are being incorporated into high-level policy documents and duediligence systems. For example, the 2012 Washington Declaration Diagnostic Framework, launched with support from USAID, includes a commitment to strengthening women’s rights. The Washington Declaration Diagnostic Framework helps countries assess their artisanal diamond mining sector and improve implementation of the Kimberley Process Certification Scheme (KPCS) – a due-diligence system aimed at preventing “conflict diamonds.” The Washington Declaration calls for participants to “promote gender equity and strengthen efforts to guarantee women equal access to land rights, education, credit and training programs” (Washington Declaration, 2016). Although the Kimberley Process Core Document does not address gender explicitly, gender safeguards call for a commitment to gender equality within Kimberley Process documents, an expansion of the definition of conflict diamond to include violence against women, and the establishment of a trust fund to support interventions for women in mining communities (GIZ & Levin Sources, 2019).

Best practices dictate that development programs in the ASM sector should approach gender as a cross-cutting issue. Gender should be an integral dimension of the design, implementation, monitoring, and evaluation of ASM development policies and programs. A normative view is emerging that ASM sector programming should aim to: